What the pros know about speed can help you fly.

“I see a guy going into a corner faster than he should and he needs to correct. He brakes, he starts to lean back on the suspension. So the tires break loose, there’s dirt flying everywhere and everyone around me goes, ‘Man he’s hauling ass,’ and I’m thinking, ‘No. He just lost two tenths.’ He was hauling ass. He isn’t anymore.” 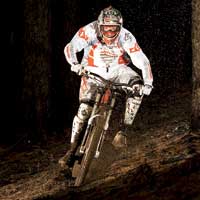 That’s Eric Carter on the difference between perception and reality when it comes to speed. And as an ex-pro BMXer, multiple U. S. National Champion DHer and winner of rainbow stripes in dual slalom and 4-cross, Carter knows that looking fast and being fast aren’t always the same things. The key to being fast, says Carter, is being able to use all the free speed that’s available.

In the end, taking advantage of free speed isn’t about being able to produce more watts. It’s about being able to apply speed-related theory to the trail so that you can master the terrain, find the right line, and know where to brake, where to focus, and where your weight should be in the cockpit, and then put it all together so you’re going as fast as possible.

What follows is primer on what the pros already know; to get good at using this information, you need to become a student of speed. To do that, you need to slow down and practice to hone your technique—because while the speed is free, being able to apply it consistently will come only through work.

Read the Terrain
The “line” is the fastest path between two points. On any course and any trail, the line is often but not always the worn path. On a racetrack (for cars), it’s the black streak where all the tires following the path have left residue on the tarmac. For this story, we also consulted someone who knows a great deal about racing cars because there’s so much crossover between what happens on a bike and what happens in a race car. R. B. Stiewing, who has taught racing for Skip Barber (skipbarber.com) for 25 years and has coached drivers ranging from Marco Andretti to Paul Newman, explains that the line exists “because it really comes down to using every inch of track that’s available.”

But unlike on pavement, the line on the trail gets chewed to bits. Which is why Stiewing also explains that the “wet line” is critical: “It’s the part of the track where most of the grip is, the outside of the corner. You go out there to find that extra traction.” That means alternate lines are essential in racing a mountain bike because the primary line might be too greasy, and without traction, nothing you want to do—turn, brake, accelerate—is possible.

Carter explains that, “often, the good line isn’t the obvious or grooved one.” So whenever speed is paramount—during a race or a fast group ride—what you’re really trying to do is find the combination of lines and techniques that add up to the fastest overall time. That may mean going slightly slower through one rough section so you have more control, which in turn sets you up to rail a smoother piece that follows. Combining the best lines is about using your brain, not merely raw skill. “When I was coming up,” Carter says, “guys like Nico [10-time World DH champ Nicolas Vouilloz] or [three-time World Cup champion] Steve Peat would take lines that physically I couldn’t do if my life depended on it, but what I could do was add up the lines that were fastest for me and then perfect my path for my own best time.”

Sam Hill (Specialized), UCI World DH Champ in 2006 and 2007, also thinks about multiple lines—and what could happen if one isn’t there on race day. “You just don’t know if there’s a berm in practice that’s gonna get blown out, and if you’ve been practicing on that berm all week, it’s going to get a lot harder [to find a new line on the fly]. It’s all about using practice to not just go fast, but to see the entire course and your other options.” Hill will tell you that picking alternate lines isn’t a hard science—you only know what’s going to be faster if you practice (and time yourself) under many conditions and circumstances. Practice will increase your confidence not just in your riding, but in knowing that an alternate line is one you can safely nail at speed and that it will still link up to the next section without a rough transition.

One of the easiest places to gain free speed is in braking (the other is in getting aero). It sounds counterintuitive, but the people who can slow their bikes down in the shortest distance have spent more time going faster. The same thing is true in a car. Stiewing says, “If you can become 20 percent more efficient [than your competition] at braking while they have to go to the brake earlier, you blow by them and then brake and you’ve just used their weakness in skill to pass.”

Carl Decker (Giant Bicycles), 2007-2008 NMBS Super D national champ (and nationally competitive rally car racer), says he’s always thinking about braking more efficiently on the bike. “Late braking in rally is the key; you get this weight transfer when you come off the brake that throws the car around the turn.” Doing this on a bike—or in a car or any vehicle— requires something called threshold braking, which is squeezing the brakes hard enough to get near lockup, but not actual lockup. The aim is to use as much of the brake’s power as possible (which means you don’t need to be on the brakes as long) without going to the point of lockup and a loss of control.

“That’s one thing people don’t get,” Carter says. “The difference between good brakes and bad brakes is modulation.” Stiewing says that once you’ve dialed your shortest braking distance on a given section of a course, you should also spot permanent visual cues so you can see precisely where and when you need to initiate braking, as well as cues for where to ease off. Permanent? “There was one guy I know who in practice used a port-a-john as his braking marker,” Stiewing says. “But then just before the race they moved the thing and you can imagine what happened.”

Learn to Trail Brake
One reason threshold braking is so important is that, as Stiewing points out, “your tires like to do only one thing at a time: stop, accelerate, steer. Start to combine them and something has to give.” Mash together steering and heavy braking and you’ll nd yourself skidding because the tires can’t keep up.

To explain the relationship between steering and braking, Stiewing likes students to envision a taut rope in a line between the brake and the steering wheel of the car. Begin to steer and that rope pulls up on the brake; you can’t put both the brakes and the steering wheel into full use simultaneously. Ditto on a bike, says Decker. “Basically, you turn more as you brake less, keeping handling neutral.”

Decker and Stiewing say that letting off the brakes too quickly throws the inertia from the front to the rear too quickly, and all of the cornering power you’ve built up by having the most weight transfer to the front tire is lost. But, Decker explains, “When done smoothly and with proper timing, the weight transfer to the front is maintained and, just as the braking forces cease to slow you down, the corner loads take over.”

The goal is to gently “trail brake,” releasing the stoppers slowly to maintain steering acuity. You can also screw up by braking too hard deeper into the turn. Braking in the corner inhibits steering. “[Do that and] the bike wants to stand up to vertical rather than lean into the turn,” says Carter. “So you have to correct with the steering, and then the front and back wheels will dog-track [not follow a single path] and the tires have to do two things at once, so you’re losing efficiency. But when a guy gets it right he brakes smoothly going straight, trails off the brakes into the turn while he leans the bike over—just once—across the apex, and stands the bike up at the exit of the turn with no wasted motion.”

Look Ahead, See Around You, Stay Centered
“If you look at shots of the pros,” says Sam Hill, “you’ll notice that their eyes are always wide open, their heads are up, and they’re looking far ahead.” Hill’s ideal high-speed scenario is one where you’re constantly checking oft the terrain in front but looking as far down the course as you can.

It isn’t always as easy as it sounds. “Novices get target- fixated,” explains Stiewing, “looking in the direction of the skid rather than where they want the car to go.” Stiewing says that looking far ahead is a trick that pros use because it makes the perception of speed less threatening. He also says using peripheral vision is key, so you can see where you are, as well as subsequent checkpoints.

Another aspect of vision comes back to line selection. If you race XC you may not have had time to do thorough recon, but if your peripheral vision is working, you can see where the course is taped and use other options. Carter’s lesson from DH: “Look to the edges of the ribbon and see what’s open and rideable. There’s probably another way that’s faster.”

Hand in hand with vision and the perception of speed is balance. “It’s human nature to get in the back seat when you’re going fast,” says Decker. “But really you want to at least be neutral in the cockpit, so you have some pressure on the front of the bike to be able to steer. It’s like skiing. Get in the backseat and you can’t turn.” Hill also uses the skiing analogy, explaining that the proper position of your body while cornering is to have your body’s mass “straight up in the air over the bottom bracket; that helps keep your traction balanced and dead even, so you can corner more accurately. And that definitely makes you faster.”

If You Learn Only One Thing…
Tie these skills together and you’ll go much faster without added effort. That’s the goal: to most effectively use the gas you have by meting it out exactly.

That said, if you take away only one lesson from this piece, work at becoming a more-efficient braker. “If Adam [Craig] and I have worked on any single thing since I started rallying, it’s braking better,” says Decker. It’ll make you quicker on any course, backyard singletrack or your local DH hill. It will also make you a smoother bike handler. And we all know that being more confident and fluid leads to covering ground more rapidly.

5 Braking Drills That Will Make You Faster!

Secret to Switchbacks – Going Down

Pre-Turn: A Must Know Skill For Smooth, Fast Corners

8 Tips For Introducing a Friend to Mountain Biking